Years ago I, with help from a couple of friends, organized an annual snowboarding trip to Whistler Blackcomb. Even after the annual trips were no more, Melanie and I continued visiting Whistler once every year or two. Our last Whistler trip was in 2007, and we’ve been wanting to return for many years. But it just hasn’t worked out for us. That is until this year when we finally made our return to Whistler, and we brought Rowan with us.

In the same spirit as those past Whistler trips1, I decided to write a daily blog post about our trip. But because I didn’t have a reliable Internet connection at the condo, I wasn’t able to publish the posts at the end of each day. So I combined the postings from each day into a single post that I have published them here. Enjoy.

We started our trek to Whistler today. It’s the first time back to Whistler for Melanie and me since 2007. For those who might not know, Whistler was like a second home mountain for me for a while. I even had a season pass there one year. But we haven’t been back since Rowan was born.

Our day began with a 4 hour car drive to Boston. The Delta flights out of Burlington were full, so we had to fly out of Logan. We flew to Minneapolis St. Paul for our first leg of the trek. We stayed overnight before continuing on to Vancouver the next morning. 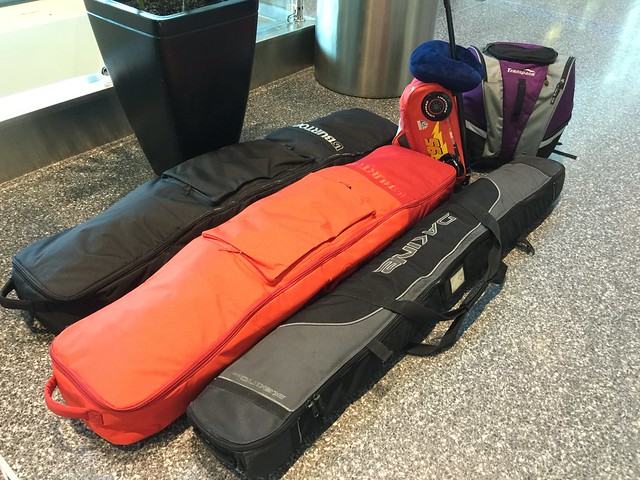 Recently I’ve been joking that our vacation in Whistler will feel more like a spring vacation than a winter one. As I type this the current temperature in Stowe is -27°F and 36°F in Whistler. That’s a 63°F temperature difference. Makes me think I should have packed a pair of shorts.

The weather in Whistler has been less than ideal. They haven’t received much new snow in recent weeks. And we’ve received more total snow in Stowe this season so far, 225 inches compared to the 186 inches in Whistler. On the plus side, there’s been plenty of sunshine in Whistler, which means lots of great views of the mountains.

Despite the lack of fresh snow and powder - 3 to 4 inches is in the forecast for tomorrow (woohoo!) - I’m sure we are going to have a great time. And Rowan is going to be amazed at the sheer size of the mountains.

Our second and final leg to Whistler went smoothly. We even arrived earlier than expected giving us time to walk around the village. Rowan was tired by this point so he became a bit grouchy, but in general he was a real trooper the entire day.

Rowan was very excited to see how close to the gondolas we’re staying. We’re at the Executive Inn, and it’s the closest to the gondolas Melanie and I have ever stayed. We are literally a one to two minute walk to the lifts.

A First For Me

When we arrived in Vancouver we were starving. It was way past our normal lunch time thanks to the time change. The only food option for us was Tim Hortons, so we grabbed sandwiches from there. After visiting Canada for all these years - my first visit to Canada was in 1992 - it’s hard to believe this is the first time I’ve eaten at Tim Hortons. 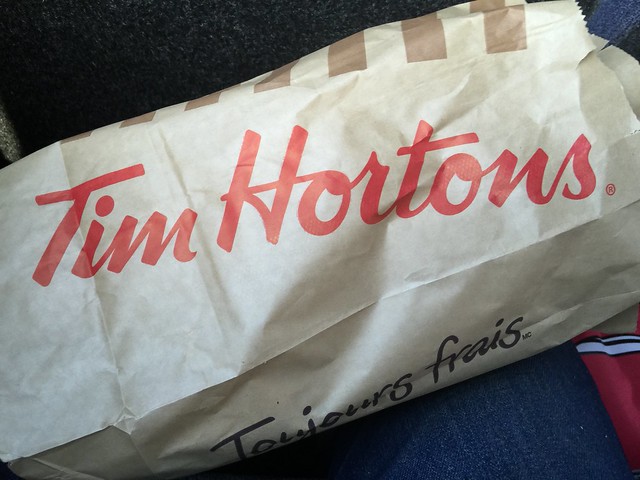 The drive up the up the Sea to Sky highway was beautiful. Nothing but sunshine, which meant awesome views. But at the same time it was a bit depressing. There was no snow. Even as we arrived into Whistler, the lack of snow was obvious and not just from the sides of the road. Many trails on the lower parts of the mountains were bare, and many trails were already closed for the season. It felt more like late spring than late February.

I’m really curious what the upper part of the mountains will be like. 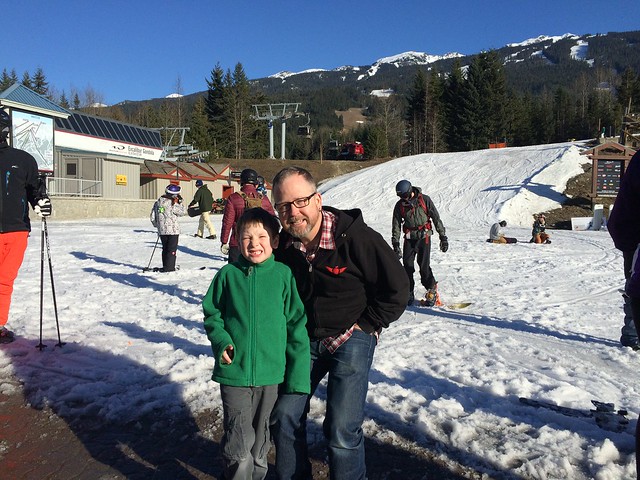 We finally hit the slopes today. After hearing about days and days of sunshine in Whistler, we get a cloudy day on the hill. And it was a bit colder than recent days. The snow was so so, about on par with the conditions during the second WASTED trip. And there was a lot more ice than I expected. 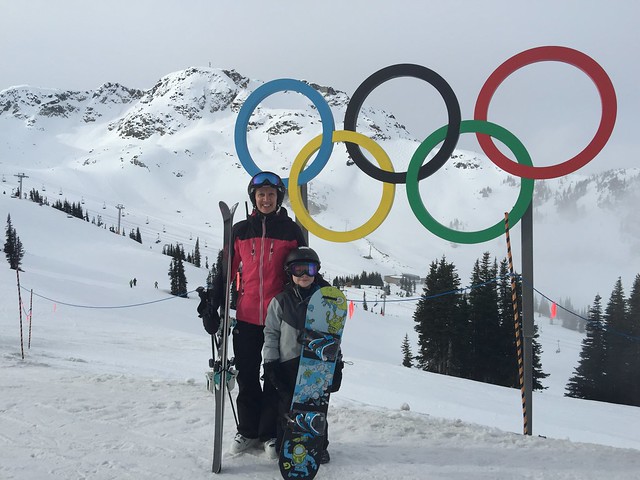 The funniest part of the day happened before the first run. Outside the Roundhouse, Melanie asked me to take a picture of Rowan and her. For some reason Rowan let go of his snowboard while I took the picture. Next thing we know is his snowboard is heading down the mountain by itself.

I strapped on my board in hopes of catching it, but his board was heading down the hill too fast. We saw it go into a small section of woods, so I started my search for the run away board there. Thankfully I found his board jammed up between two trees. Had the board been six inches to rider’s left it would have exited the tree patch, and it might have been lost forever. We got lucky. 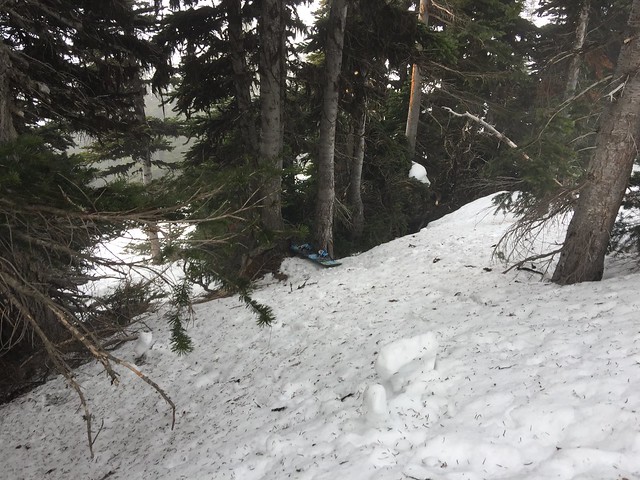 Rowan wasn’t into the conditions today. I don’t blame him. It wasn’t the best. The spring conditions from the previous day turned to hard pack when the colder temps rolled in. So we did 5 runs then called it a day.

The Peak 2 Peak gondola is a nice addition to the resort. We did a few runs on Whistler then jumped over the Blackcomb, something I wouldn’t consider doing before the Peak 2 Peak lift was installed.

Snow was falling when we left the top of the mountain. I hope it continues through the night, but I doubt it will. Still, looking forward to hitting the hill again tomorrow.

The snow conditions weren’t the only disappointment today. We stopped by Longhorn Saloon for après ski and was told that kids until 21 are not allowed in after 2 pm. So no poutine for us today.

Today was a bit better than yesterday. Moods were better too, which helped.

We rode Blackcomb in the morning, then took the Peak 2 Peak over to Whistler at lunchtime, which is where we stayed for the rest of the day. Visibility was good this morning, but very poor this afternoon after the clouds moved in.

We decided to wait for the glass bottom gondola on the Peak 2 Peak. Rowan and I enjoyed looking down below us. Melanie didn’t seem to care for it much.

While on the Whistler side, we went to the Tree Fort. Rowan had a lot of fun climbing up the fort and sliding back down.

Turns out the condo we rented has a heated swimming pool and hot tub, so we took Rowan swimming this afternoon, which he loved.

I went out for a few runs before meeting up with Rowan and Melanie. Snow conditions were the same, but it was partly cloudy so we had some great views.

We had lunch at Longhorn since we can’t go there for après ski. The poutine there are soooo dang good. And we did a run from the top of Harmony Express to the bottom.

Rowan is finally over his jet lag, so we walked around the village. The new ice skating rink is nice, and Rowan wants to hit it tomorrow. The playground is all new too. Well, new since my last visit.

Rowan was excited to “discover” the ice rink and playground. Guess we’ll be visiting North Village more over the next couple of days. 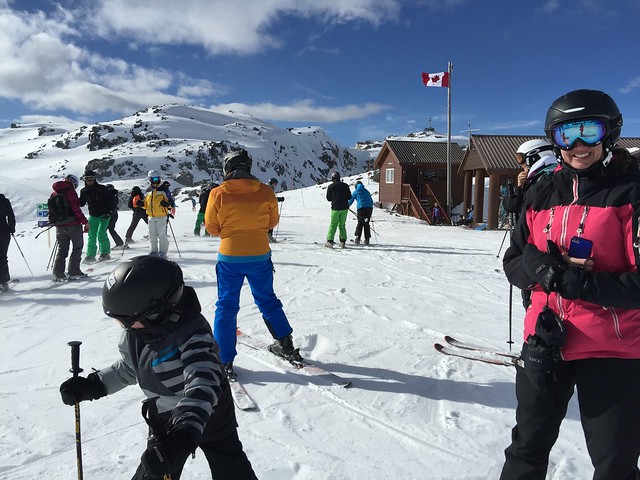 On Day 4 we took our time getting out to the mountain. Put quite frankly, riding hard pack day after day gets rather boring. Melanie and Rowan did a bit of shopping in the morning. When we did finally hit the hill, we did one long run down to Merlins for lunch. And of course we had to order the Nacho Daddy even though it was way to big for the three of us. 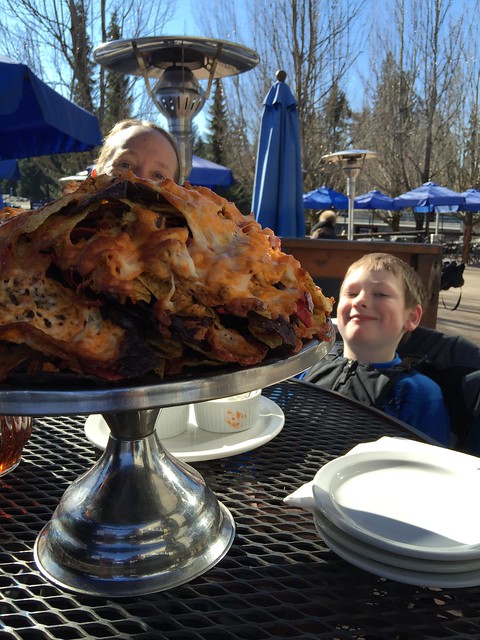 After lunch we headed back up Blackcomb and did a few more runs. There wasn’t a cloud in the sky so we had plenty of incredible views. We rode 7th Heaven at the end of the day, and got last chair there twice - we were prepared to hike out but the lifties let us back on for one more ride up. We rode from the top of 7th Heaven down to Whistler Village to finish up our day on the mountain.

Afterwards we went to the swimming pool and hot tub. I stayed out of both opting to throw a ball from the side of the pool to Rowan who was playing in the pool. 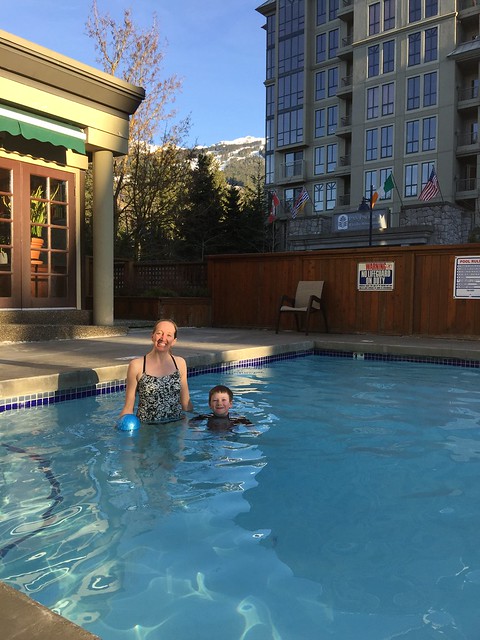 Later in the evening we went ice skating, which I suck at, Rowan’s getting better at skating, and Melanie was the best of us three. The ice rink in the village is really nice. It’s outdoors and has a small hockey play area in the center. It’s also free to skate if you have your own skates, or $5 to rent a pair. Melanie wasn’t overly excited at first about ice skating, but when it was over she said she’s glad we did it and that she had a lot of fun skating. 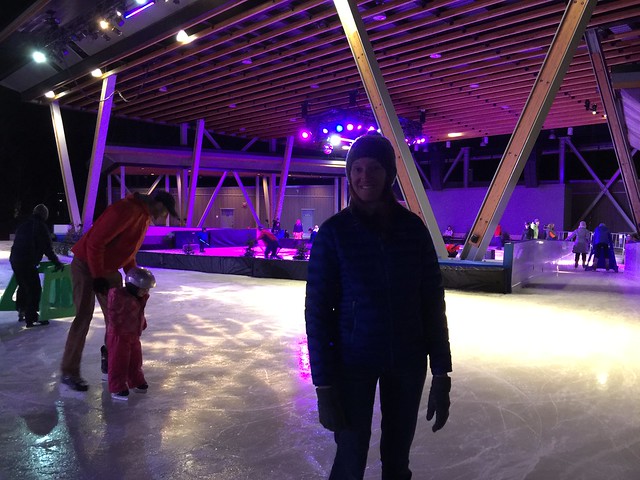 Today was our final day on the hill. We took it easy today since the snow conditions were unchanged - still hard packed. We slept in this morning. When we did finally hit the slopes we did a warm up run then we headed straight for the Peak Chair and the top of Whistler. We rode back down to the village where we had lunch at Dubh Linn Gate. 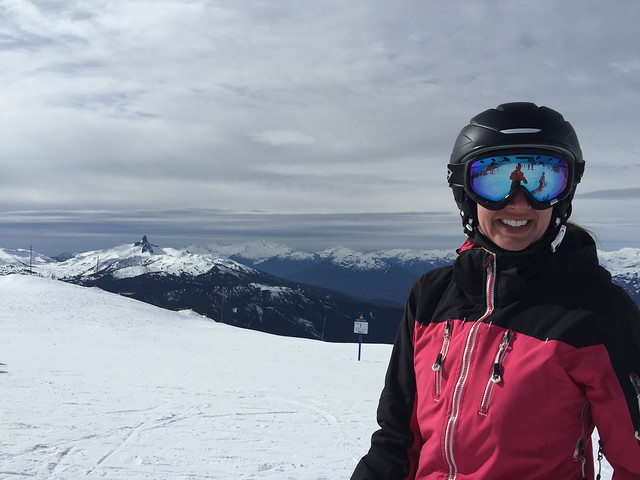 After lunch we headed back up to the Roundhouse so Melanie could shop for a shirt. Then we took the Peak 2 Peak gondola over to Blackcomb. Rowan wanted to play at the castle one last time. Unfortunately it was closed by the time we got there, so we made our way back down to the village.

When we got back to the condo, Rowan said he soooo tired. Melanie suggested relaxing at the condo for a bit, but he would have none of that. He wanted to go swimming, and he said the swimming pool would wake him up. So off Melanie and Rowan went while I stayed behind to shower.

We ended our final night in Whistler watching the Fire and Ice show. Three snowboarders and three skiers doing tricks off of a big kicker and through a ring of fire. Rowan was most excited to see the back flips. He had been wanting to see someone do a back flip since the start of the trip, and he got to see a number of them at the show including a one legged back flip on a snowboard (the rider’s back foot was unstrapped).

It’s been a great week in Whistler despite the lack of fresh snow. We all had a great time, and more importantly Rowan wants to come back. In fact, he says he doesn’t want to leave. So we’ll be back in a couple of years hopefully when the snow conditions are better.

The trek home was a long one. We packed up and left Whistler around 9 am Pacific time, and arrive back home in Vermont at 3:30 am Eastern. It was a long trek home, but all three of us were glad to be home. And it was nice to see a fresh 3 inches of snow on the ground.

For more photos from our trip, take a look at the complete photo album.